LinkedIn serves its dynamic content (e.g. HTML and JSON) from its data centers, while utilizing CDNs for serving the static assets such as CSS, JS, images etc. Like many other web companies, we have been using PoPs (Point of Presence) to improve the download time of the dynamic content.

PoPs are small scale data centers with mostly network equipment and proxy servers; that act as end-points for user's TCP connection requests. PoP would establish and hold that connection while fetching the user-requested content from the data center.

In this post, we will talk about the Real User Monitoring (RUM) based data-driven approach LinkedIn took to decide optimal mapping of user requests to PoPs.

Let's take an example of the LinkedIn desktop homepage and go over how PoPs help to improve the measured page performance. 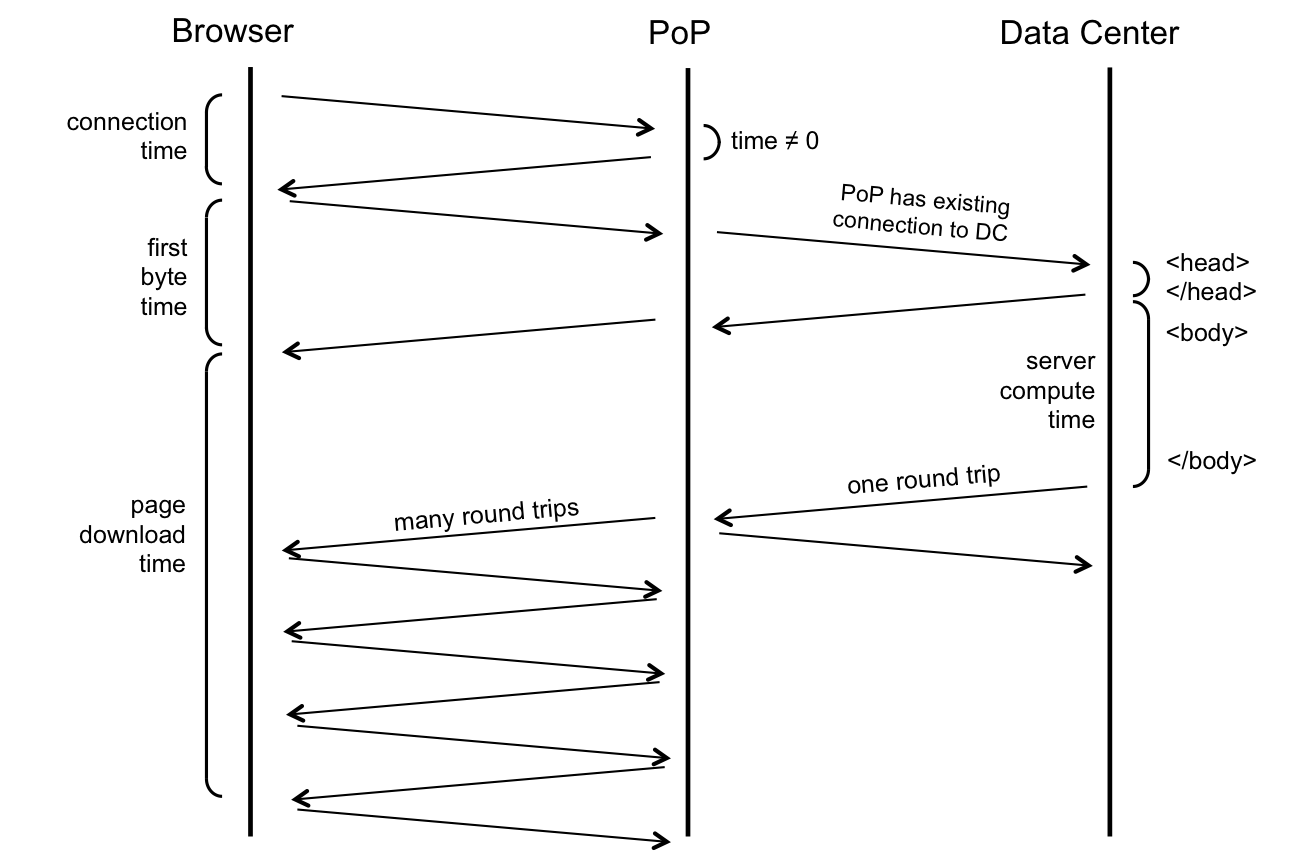 Here are the sequence of steps for downloading the desktop homepage
For the homepage use case, step 7 can consist of 3-5 RTTs. For users with high RTTs to our data centers, PoPs help improve the overall download time by reducing the RTT between users and PoPs.

Now that we know how PoPs help performance, lets talk about the underlying mechanism to map a user to a PoP.

LinkedIn uses DNS for PoP selection. We use third-party DNS providers as the authoritative name servers for www.linkedin.com. These providers let us configure their name servers to give different DNS answers based on user’s geographic location.

Given this ability and our expanding PoP footprint, the obvious next question was how do we make sure that our users are connecting to the optimal PoP?

Here are a few techniques we evaluated which did not work:
Geographic distance: The simplest approach is to assume that the geographically closest PoP is the optimal PoP. Unfortunately, it is well known in the networking community that geographical proximity does not guarantee network proximity.
Network connectivity: Our Network Engineering team could have just assigned geographies to PoPs based on their understanding and knowledge of global internet connectivity. Unfortunately, the Internet is an ever changing beast (and we help change it by peering) and we would have never kept up with it by using a manual approach like this.
Synthetic measurements: We could also run synthetic tests using monitoring companies such as Keynote, Gomez, Catchpoint, and so on. These companies have a set of monitoring agents distributed across the world that can test your website. Well known problems with this approach include: So, we decided on using a Real User Monitoring (RUM) based solution.

RUM, or Real User Monitoring, is a passive monitoring technique which consists of JavaScript code (LinkedIn RUM uses the boomerang library) that runs on the browser when our page is loaded and collects performance data. It does so mostly by reading the Navigation Timing API object exposed by the browsers. RUM sends the performance data to our beacon servers after page load. The beacon servers then send the event to our Hadoop cluster using Kafka.

RUM is now the industry standard way to monitor the overall site performance. But, it is also a great data source for network performance analysis since RUM data has the user IP address along with various network performance metrics such as connect time, first byte time, page download time, and so on.

RUM measurements are done after page load and have no impact on the user experience. Thus, we can enlist our users to help improve their site experience by doing tiny, non-intrusive measurements (from their perspective) when they visit our site.

To identify the optimal PoP per geography, we enhanced our RUM framework to find latency from users to all the PoPs. This is done by downloading a tiny object from each PoP after the page is loaded and measuring the duration to download the object.

The following code snippet shows how this is done in JavaScript. This basic code workflow is added in our RUM framework for each of the PoPs to get the necessary data.

Even though the object being downloaded is tiny and the download itself is non-intrusive, we still limit this measurement to only 1% of our page views, which is enough to get meaningful and useful data. Through a daily Hadoop job, we aggregate this data and recommend optimal PoP per geography.

Once we knew the optimal PoP per geography, we configured our DNS providers to change PoP per geography and started seeing some amazing performance gains. We will talk about them in the Results section later in the post.


Which PoP served my page view?

Using PoP beacon data we were able to identify optimal PoP per geography in most cases. But a few open questions remained:
The answers to all these questions can be found by identifying which PoP actually served a particular page view and tying that information to other RUM metrics.

For the last two questions, once RUM is instrumented to add PoP information, we could run A/B tests between the candidate PoPs to identify the optimal one. Similarly, for the first two questions, we can use RUM to identify if the new PoP assignment took effect in a geography and whether it even helped.


Problem: Network Intelligence is at DNS

We implemented the following solution to identify the PoP that served a page view: Here's a small code snippet that show how this is done in JavaScript:


https://gist.github.com/RiteshMaheshwari/1207875fe10716570ef9.js
At LinkedIn, we have used this method for RUM monitoring of our CDN providers' performance as well since this is a generic methodology for identifying any DNS resolution in JavaScript.

Globally, we have enabled the PoP ID measurement for 10% of our members. This gives us enough samples to monitor PoP assignment constantly. We also enable PoP ID to a larger set of users in a given geography if we are running some experiment with PoP assignment.

With PoP Beacons and PoP ID RUM data, we are now able to use a data driven approach to assigning users to our PoPs. The following chart shows gains in page download time for LinkedIn homepage for selected countries from this work. 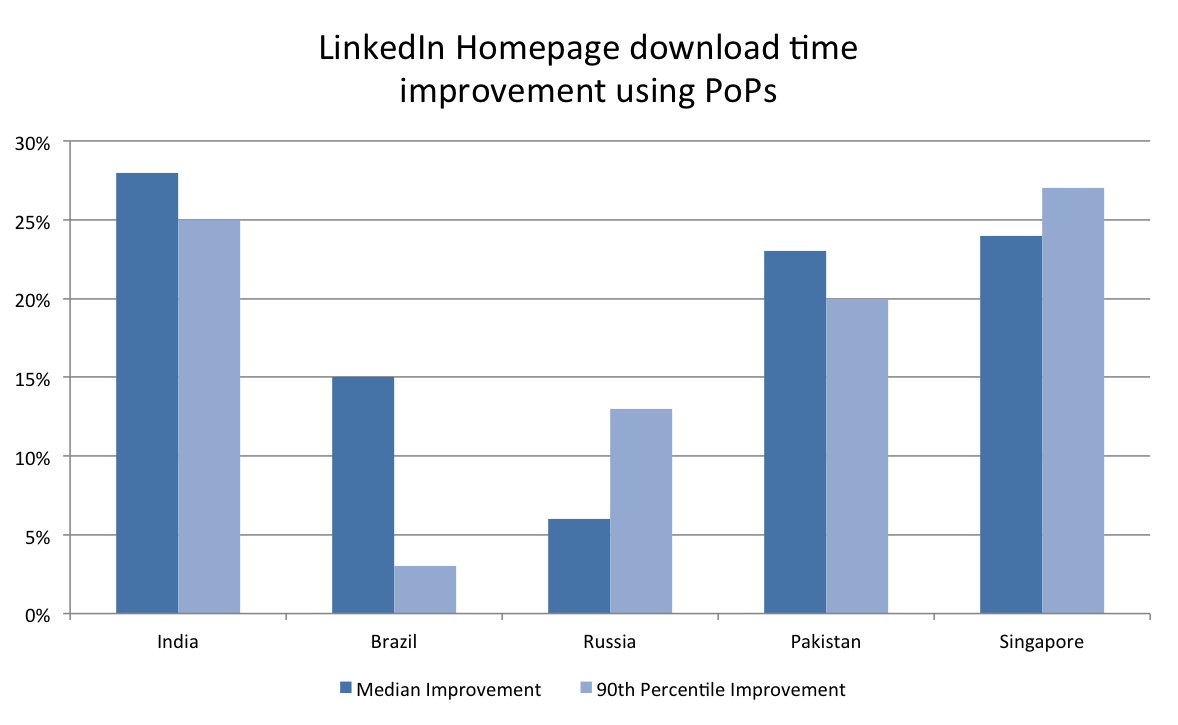 When we built our APAC PoP, it was not clear whether traffic from South Asia should be served from the APAC PoP or the Europe PoP. Common knowledge in the network community suggests that India has better connectivity to Europe. Through the PoP Beacon measurements though, we were able to determine that APAC is the more optimal PoP for most of our users in India, although Europe was not far behind. For Pakistan though, we got the opposite results: Europe came out slightly better than APAC. So through weighted DNS round robin, we directed half of the traffic from India to APAC and Europe PoPs respectively. We did the same for Pakistan. Using performance data from RUM segregated by PoP ID, we were able to conclusively determine that for most of our members in India, the APAC PoP is a better pick; while for Pakistan, the Europe PoP is a better pick.

When we correctly assigned users in India and Pakistan to use their respective optimal PoP (instead of the previous default, US West Coast PoP), we observed 28% and 25% reduction in median page download time, respectively!

Many countries in the Middle East appear geographically close to both Europe and APAC. Again, using the PoP Beacons data, we found that Europe is a better PoP for them. Upon assignment, we observed a 10-14% reduction in median page download time!

China was expected to benefit from our APAC PoP, but the PoP Beacons surprisingly data showed that our US West Coast PoP had lower latencies to most of China users than the APAC PoP. Using third party monitoring tools, we were able to run traceroute from agents in China to our APAC PoP. The traceroutes showed some routing inefficiencies that made the packets take a longer route than necessary. Our Network Engineering team then worked with Chinese providers to resolve this. Unfortunately the gains are hard to quantify for China because we were not able to do a sane A/B test ( simplified chinese language launch and few other initiatives overlapped with our change). The expectation is that the gain is close to what is observed in other Asian countries.

Having gone through the results from this project, lets talk about some of the shortcomings and caveats that make this work even more interesting. PoP selection is based on the user’s DNS resolver IP address. This has two major problems:
These problems can cause suboptimal PoP selection even though we have configured our DNS servers correctly. The PoP ID data from RUM shows some interesting statistics:
Digging deeper, we found that about 45% of eastern US traffic connected to our US West Coast PoP even though East USA is configured to be sent to our US East Coast PoP. This is likely due to bad Geo-IP database used by our DNS providers. We are working with them to resolve this.

Given how important PoPs are for performance, we are working to do three things recently:
Using RUM data for user assignment to PoPs, we improved content download times by 10-28% for most of our users. I hope with this post I showed you that: Many thanks to the NetOps, DSO and Traffic SRE teams for all their help in getting this project done!