Journey to the Promises Land

In October, we released our completely redesigned iPad application, culminating months of implementing brand new functionality on both the client and the server. We use a node.js server that aggregates data from multiple back-end services, meaning we deal with complex asynchronous data flows.

Previously, we used async and Step to manage these data flows. In implementing new functionality, we explored the use of Javascript promises, choosing q as the implementation. We found promises are well-suited to representing the complex IO dependency patterns required in our application. Furthermore, the Promises/A+ specification backing up the promises implementation provides strong guarantees useful in reasoning about these control flows, especially with respect to error handling.

Why do we need flow control patterns in node.js?

Asynchronous, callback-based code is prone to what's known as the pyramid of doom.

This would be even more complicated if we handled the errors.

Control flow libraries solve this problem by introducing higher-level constructs that abstract common flows. Step abstracts two flows: sequential flows, like the one above, and parallel flows, in which multiple asynchronous calls are made in parallel with a final callback being called only when all the calls complete.

However, these libraries are only de-facto standards and have no formal specification. This introduces gotchas that can only be understood by reading the library source code. Additionally, error propagation is a manual process in Step, where each step of the above pipeline must pass along errors to the next step in the pipeline.

Alternative control flow libraries have cleaner solutions to these problems, and the cleanest of these, we found, were libraries that used promises.

So, of course, we were excited to use such an implementation! Based on some searching, we found that q is widely-used and provided useful convenience functions on top of the functionality in the specification. With a library in hand, we went to work using promises throughout our codebase.

As with any existing code base, the LinkedIn iPad server consisted of code that used callbacks liberally. Luckily, as is the convention with libraries such as Step, these callbacks were node-style callbacks, which accepted an optional error as the first argument, followed by data as the subsequent arguments in the non-error case.

This made it easy to introduce promises incrementally, using q's .denodeify(nodeFunc, ...args). This function translates a callback-accepting function into one that does not require a callback but returns a promise. The promise is resolved or rejected based on the values that would have been passed to the callback, causing the correct handler to be called:

Converting back to a callback-accepting function is similarly simple; the two functions passed to .then() are mapped to a callback.

With these techniques, we introduced promises into each new file we wrote, and by the end of it, about 35% of the application (non-library) logic uses promises as for its asynchronous control flow needs. We didn't modify existing code, including a substantial portion providing functionality relevant only to older versions of the iPad application.

Sequential data flows are simple, but at LinkedIn, we see much more complex data flows. We frequently need to gather data from multiple sources in parallel. When doing so, we want to ignore certain data if they cannot be retrieved in the reasonable time, while requiring some other data to be available before we continue to render. Additionally, we want to chain operations that depend on each other while not blocking operations that can proceed independently. Promises provide straightforward solutions to these requirements.

A common use case, we wish to retrieve some data that is not mandatory to rendering a page. In that case, we handle this case by logging the error or exception that happened while fetching the data and returning a default value. For example, if we are expecting a list of items and the backend errored out, we may default to an empty list.

From this, we have established a pattern in which we create a function that is able to take an error message and return it. We can then use this function as the error handler attached to a promise

q provides a convenience method .fail(errorHandler), equivalent to .then(undefined, errorHandler). We use this method liberally for this use case.

Another common use case is to make multiple HTTP requests in parallel, while degrading gracefully if some of those requests fail.

In our updates stream, we blend together your network updates, various types of recommendations (such as people you may know), and news articles to create a much relevant and richer feed. While we would ideally like to have all three sources of content, we can tolerate failures in retrieving the latter two.

This means we fire off requests to retrieve all three pieces of data in parallel. If the people you may know call fails to return in a reasonable time, we can default to empty list of recommended people. Similarly for the news articles. After all three pieces of data have been resolved either from the backend or with substituted defaults, we can combine them and send back partial data to the client. Only in the case of failing to fetch the network updates, we will send back an error to the client. The flow looks like this. 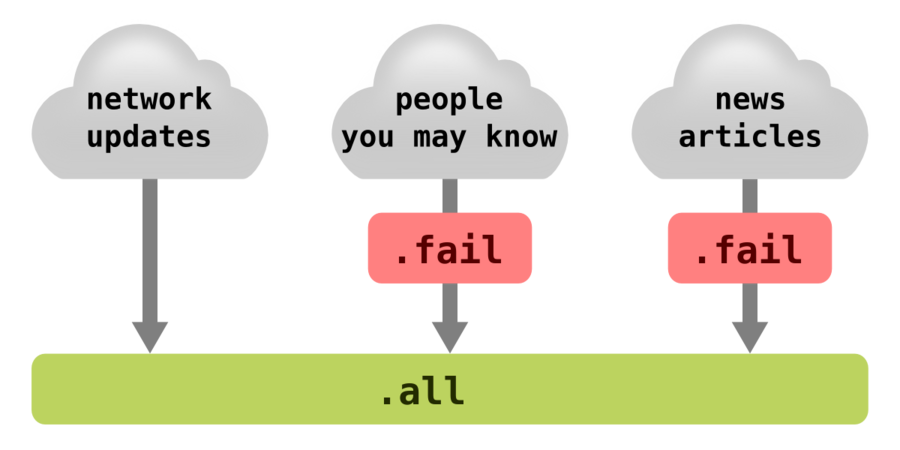 While this is possible to accomplish using a library such as Step, promises, and q's helper functions, make it straightforward to map into code.

Again, q provides a convenience function, .spread(onFullfilled, onRejected), that takes the array generated by q.all() and spreads the data out into a variadic success handler. For those familiar with Step, this is similar to .parallel().

Promises excel at representing dependency directed acyclic graphs (DAGs) in a way that mirrors the structure of the graph itself. Consider our job page. In this page, we present information about the job, and the company where the position is held. We also present how you're connected to that company along with a list of similar jobs. Finally, we also present whether or not you have saved the job to consider in near future

Given that the jobID present in the request URL, we can immediately fetch information about the job (along with its corresponding company) and if you have saved this jobID in your interest list. Once we have the company information, we can extract the company ID, and find the connections who work at that company and also match the similar jobs at that company. Only the first of these four calls is strictly required, the latter three are optional 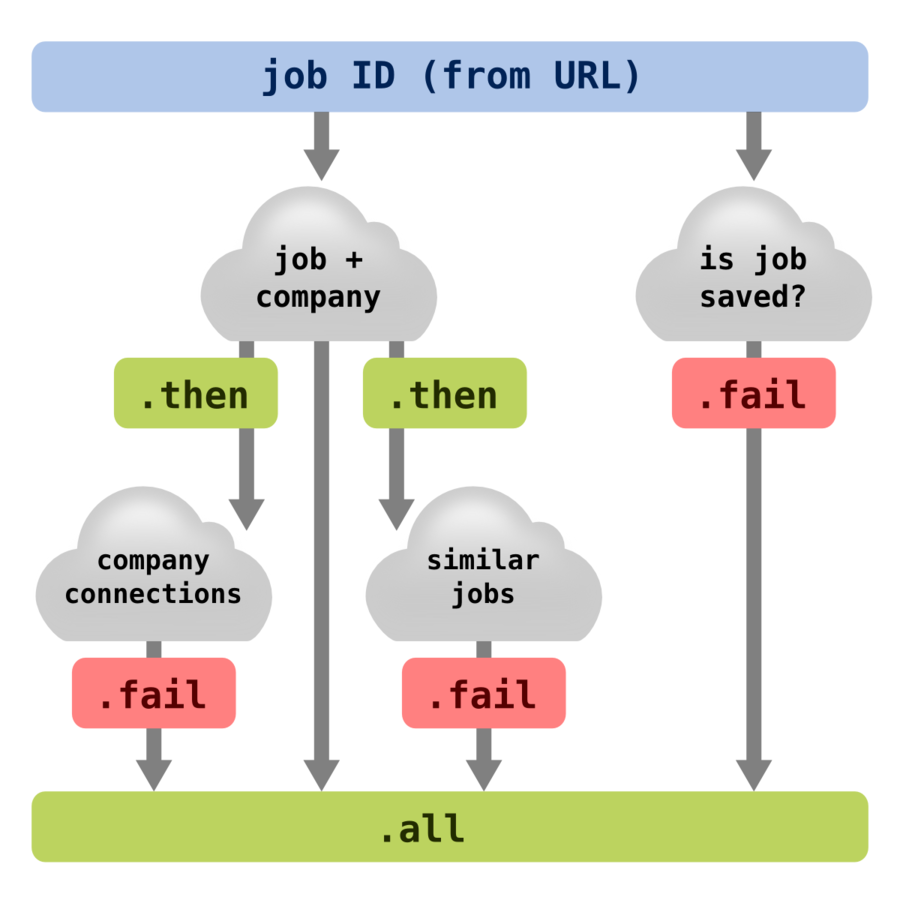 Conceptually, this is simple, and again, it can be mapped to code using a library such as Step. However, such code will not reveal the inherent DAG shown in the above diagram because ultimately, Step represents a linear flow. With q, the dependencies are explicitly stated as below

What we loved about promises were the strong, logical guarantees made by the Promises/A+ specification. But here are some scenarios that caught us by surprise based on the assumptions we made

Early on, we liked the idea of explicitly spelling out error handlers using q's .fail function instead of simply passing both the success and error handlers to .then

However, these two constructs are not equivalent. Suppose that the handleData function encounters an runtime exception dereference undefined object. In the first flow, the error goes on to the next handler in the sequence. In the second flow, the error is passed along to handleBackendError! In that case, handleBackendError is now actually dealing with or a runtime javascript error when it was actually intended to deal with the back-end error. This is illustrated below in the example. 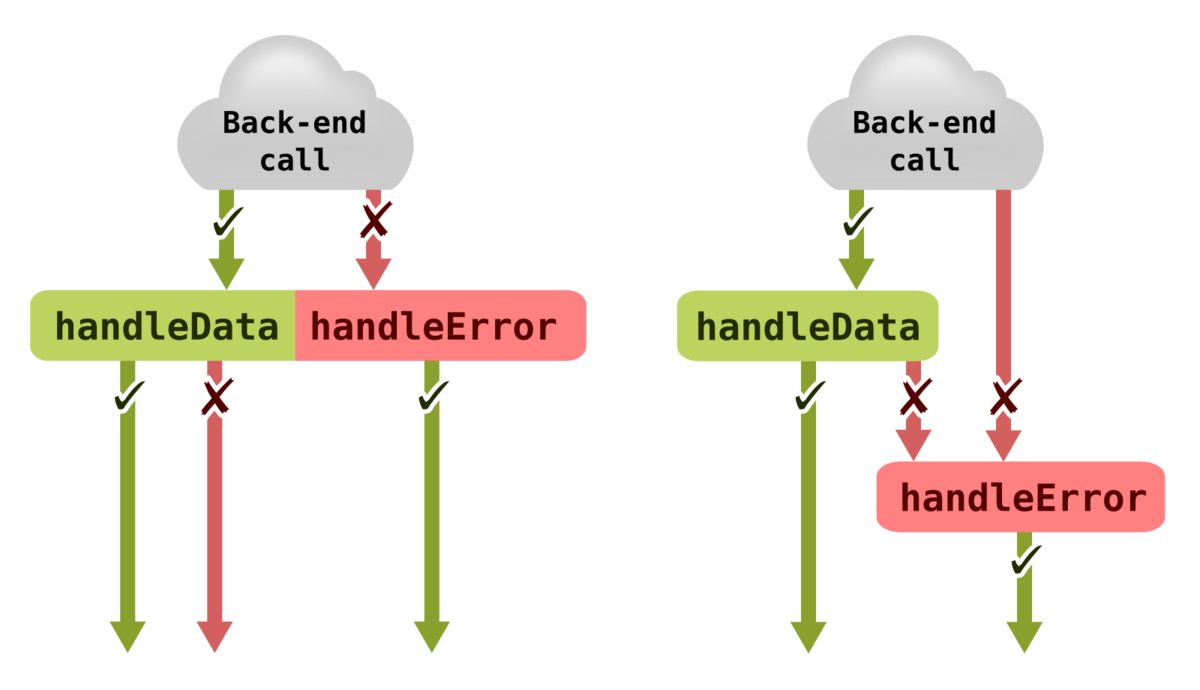 The first diagram is the flow we want to have, where even in the case of an runtime error in the handleData, we propagate the error to the next step in the pipeline. The second diagram is the incorrect flow, where handleError handles errors both from the back-end call as well as from handleData. In some cases, we do want the latter, but we need to be aware of having the distinguish between the two use cases

In our groups page, you'll find two sources of data, groups you have joined, and groups you may like to join. The HTTP endpoint for that functionality accepts an optional query parameter in the URL, allowing you to filter to one of the two types of results, defaulting to both if the parameter is absent.

To support this functionality, we created a promise for each of the two types of results, as they come from different back-end services. Based on the query parameter, we only attached a .then handler to one of the promises, or piped both through q.all. What we failed to realize was that whether or not a handler is attached to a promise, the back-end service call will be invoked immediately for both when the promise is created! What we indeed wanted was to invoke one or the other conditionally if the filter was present

The solution was to create the promises themselves conditionally. Luckily, promises are just Javascript objects, so this is easy to do.

Promises play well with testing frameworks, such as Mocha. When we unit test a function that returns a promise, we can attach handlers to the promise and make our assertions in the handler.

Because Mocha provides a node-style callback as means of running asynchronous tests, we can pass in done right into .nodeify().

We are extremely pleased with the use of promises in Javascript. Using promises has:

We hope this results in a better experience for you as you browse the redesigned iPad application.