The LinkedIn website is composed of a number of services, such as a service for Profile data, another service for Company data, and one more for Groups data. In production, each service is deployed separately and communicates with the other services via a well-defined API.

During development, LinkedIn engineers have historically deployed all the services on their local computer. LinkedIn has been growing fast and the number of services has grown along with it. This has gradually increased the time it takes to bring up the entire stack on a developer machine.

The ideal model for a developer is to deploy locally only the services he is actually modifying. Working with a few other engineers on a Hackday project, we showed how this could be done. We called this project "Quick Deploy", and in this blog post, I'll tell you how we used a distributed systems approach to make it work, some of the "gotchas" we ran into along the way, and the benefits we've seen as we roll this out to all of engineering.

Most of the time, a developer is only modifying a handful of services. Our goal was that these should be the only services he deploys locally. Everything else should be deployed in an external shared environment. The main difficulty was how to correctly route requests: if there are many developers using this shared environment, and each developer has his own subset of services deployed locally, how do we figure out which services to go to for each request?

Our solution was to use a proxy and cookies. We setup a proxy in our early integration (EI) data center, where all of LinkedIn's services are deployed. These services are updated periodically and redeployed, so they are always running the latest code. All services - both those deployed in EI and those deployed on a developer's box - route all their requests through the proxy. 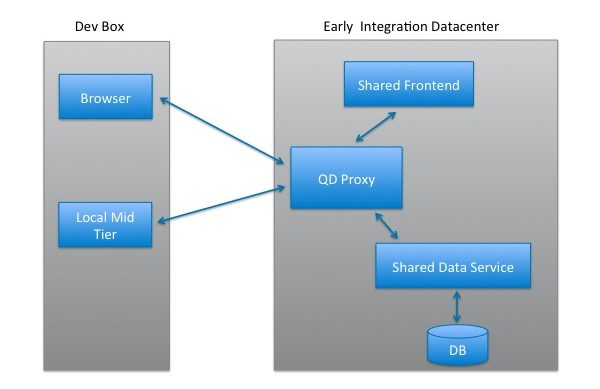 To use Quick Deploy, the developer workflow is as follows:

Suppose you're working on an app with a typical 3 tier architecture: a front-end that renders the UI (HTML), a mid-tier that handles business logic, and a data-service that reads and writes from the DB. You want to make changes to the mid-tier, so you deploy it locally and add it to your routing profile. Here's how requests will be routed when you test your service by clicking around the UI:

As we started rolling out Quick Deploy to the engineering staff, we ran into a few technical issues. One issue was that engineers were sharing the same database. We had developed a set of test accounts (Alfred, Bruce, Carole, Diane, etc) that all engineers used when testing their code. While getting ready for the Japanese language launch of the site, we often ran into issues when someone would change Alfred's language to Japanese. Any other developer using Alfred would get a big surprise. 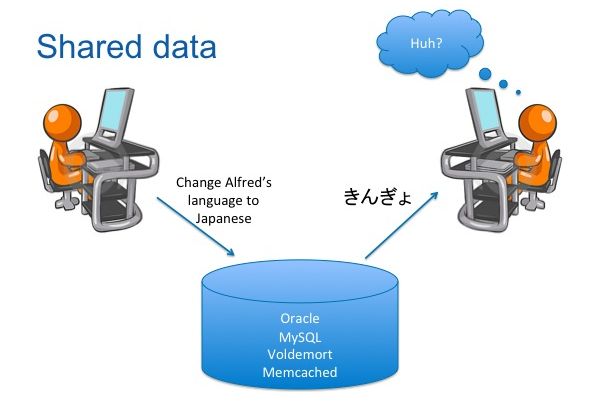 The solution to this was simple: we needed to create more test accounts. This way each engineer could have his own set of users to test with.

For example, with ActiveMQ, at most one consumer can consume a message on the queue. If a consumer is deployed both locally and in EI, there is no way to tell which one will actually consume any given message:

The solution for this problem is to deploy locally both the asynchronous technology (e.g. ActiveMQ, Quartz) as well as the "cluster" of services that your changes affect. This removes contention between services in EI and services deployed locally. For example, if you're making changes that affect a particular set of ActiveMQ messages, the workaround is to deploy locally both the relevant "cluster" of consumers and producers for that set of messages and your own instance of ActiveMQ. The services deployed locally only consume from the local queue and the services in EI only consume from the EI queue, so there is no contention.

As we iron out the bugs, we are rolling out Quick Deploy to more and more people, and expect all of engineering to be using it by the end of the year. What started as a Hackday project is now yielding huge benefits for the entire company, including:

The original hackers who prototyped Quick Deploy were Adam Cataldo, Prachi Gupta, Thomas Feng, and Angelika Clayton. It won the "Most Likely to Make Engineers Happy" Hackday award. Brent Vincent has been managing the effort to roll out Quick Deploy to all of engineering.