We are pleased to announce the open source release of Databus - a real-time change data capture system. Originally developed in 2005, Databus has been in production in its latest revision at Linkedin since 2011. The Databus source code is available in our github repo for you to get started!

LinkedIn has a diverse ecosystem of specialized data storage and serving systems. Primary OLTP data-stores take user facing writes and some reads. Other specialized systems serve complex queries or accelerate query results through caching. For example, search queries are served by a search index system which needs to continually index the data in the primary database.

This leads to a need for reliable, transactionally consistent change capture from primary data sources to derived data systems throughout the ecosystem. In response to this need, we developed Databus, which is an integral part of LinkedIn's data processing pipeline. The Databus transport layer provides end-to-end latencies in milliseconds and handles throughput of thousands of change events per second per server while supporting infinite lookback capabilities and rich subscription functionality.

As shown above, systems such as Search Index and Read Replicas act as Databus consumers using the client library. When a write occurs to a primary OLTP database, the relays connected to that database pull the change into the relay. The databus consumer embedded in the search index or cache pulls it from the relay (or bootstrap) and updates the index or cache as the case may be. This keeps the index up to date with the state of the source database.

How does Databus work? 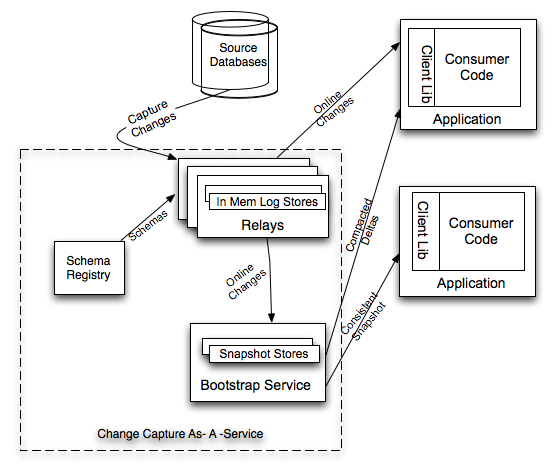 As depicted, the Databus System comprises of relays, bootstrap service and the client library. The Relay fetches committed changes from the source database and stores the events in a high performance log store. The Bootstrap Service stores a moving snapshot of the source database by periodically applying the change stream from the Relay. Applications use the Databus Client Library to pull the change stream from the Relay or Bootstrap and process the change events in Consumers that implement a callback API defined by the library.

Fast moving consumers retrieve events from the Databus relay. If a consumer were to fall behind such that the data it requests is no longer in the Relay's log, the consumer will be delivered a consolidated snapshot of changes that have occurred since the last change processed by the consumer. If a new consumer with no prior copy of the dataset shows up, it’s given a snapshot of the data (consistent as of some point in time) from the Bootstrap service, at which point it continues catching up from the Databus relay.

We invite you to download and try out Databus. Databus has been in production at Linkedin for a number of years where it supports the critical primary data processing pipeline. By open sourcing Databus, we intend to grow our contributor base significantly and invite interested developers to participate.