vnc.js: how to build a JavaScript VNC Client in a 24 hour hackday

All the source code for this post is available on GitHub: vnc.js and tcp.js.

Last summer, as a LinkedIn intern, I participated in LinkedIn's first public Intern Hackday. Interns from all over Silicon Valley came down to LinkedIn's headquarters in Mountain View to hack all night, eat free food, pound energy drinks, and compete for awesome prizes. With Macbook Airs, iPads, and bragging rights on the line, my team decided to go big. Our goal:

Build a VNC client in 100% JavaScript that will run in the browser and be able to connect to any remote host... and do this all in under 24 hours.

In this post, I'll tell you how we combined Node.js, socket.io, HTML5 canvas, and a solid understanding of the RFB protocol to create vnc.js.

In order to get a VNC client working the browser, we needed the following pieces: 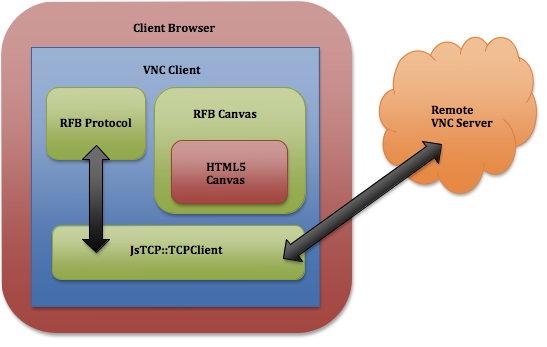 tcp.js: A TCP proxy written on top of Node.js and Socket.IO 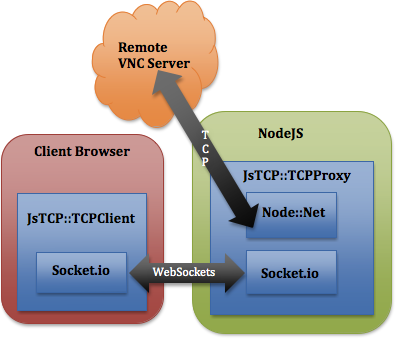 We recognized the inevitable complexity of our hack and chose to spend a little extra time up front to cleanly abstract all of our connectivity concerns. Because we're using the same language in both the browser and the server (JavaScript), the result was a very clean abstraction that we called tcp.js. It's dead-simple to use:


Implementing the RFB protocol in the browser

Given our time constraints, we decided to implement a subset of the RFB protocol 3.3. Namely, we would only use encryption during the authentication phase (which uses the very simple DES block cipher) and we would only support Raw and CopyRect encodings.

We broke the RFB implementation into the following four steps:

Luckily there were several open source VNC clients written in C that we were able to reference to understand why our authentication was failing. We also found an open source JavaScript DES implementation that we could use with only minor tweaking. Finally, we found a really neat (hack) way to flip the bits of our challenge response:

The ServerInit phase is straightforward: the server sends a message with the machine name, the dimensions of the screen, and the pixel format. Once we've received the screen dimensions we create an HTML5 canvas with the same dimensions. Given the time restrictions, we didn't attempt anything fancy like scaling. The advantage of using a canvas that's the exact same size as the remote frame buffer is that mouse movements and clicks are translated 1 to 1.

The update process works as follows: the client sends a FrameBufferUpdateRequest specifying the encoding methods it supports and the server sends back the content using one of the encoding formats you've requested. The RFB protocol supports incremental updates, so we would request a full update at the start followed by incremental updates at some periodic interval.

To keep it simple, the only encoding methods we implemented were Raw and CopyRect. Raw encoding is just the raw pixel data. CopyRect is the server taking advantage of the fact that it knows exactly what the client has in its buffer, so it is able to tell you to move a portion of your buffer to another part of the screen. CopyRect is significantly more efficient than Raw, especially for operations such as window dragging.

The FrameBufferUpdate messages, which are the messages that contain the screen pixel data, had one gotcha: after the initial implementation, we found that our screen updates were working only ~30% of the time. As it turns out, the RFB spec allows for multiple updates to be sent in a single message. Once we were able to understand exactly what the server was sending back, we were able to correctly process the FrameBufferUpdate messages and at that point we had working screen viewer!

After around 17 straight hours of hacking, we were rounding the home stretch and had only mouse and keyboard support left to build. Luckily, the event-based nature of JavaScript made it very easy to implement keyboard and mouse support: all we needed was a simple translation from the key press events and mouse move events to the equivalent RFB messages.

In less than 24 hours, we had built a VNC client entirely in the browser using only JavaScript. Here's a screenshot of my browser with vnc.js running and rendering the desktop of a remote VNC host:

Grab the code on Github - vnc.js and tcp.js - and try it out for yourself! Of course, the usual hackday disclaimer applies: the project was thrown together in under 24 hours, may contain bugs, and has almost no documentation.

A huge thanks to my teammates, who sacrificed much sleep to make this hack possible: Avik Das, Fabio Angius, and Ferris Jumah.