In a previous post, we told you how LinkedIn is dumping server-side templates in favor of client-side templates. We've gotten lots of great feedback that we'll discuss in future posts, but today, we'll focus on one question that was especially popular:

How did LinkedIn pick dust.js as its client-side templating solution?

In the following blog post, we'll outline the requirements we had, the evaluation process, and the results.

The open source community has created a huge number of client-side templating solutions. When we did our initial research, we came up with a list of 26 templating technologies. We eliminated 8 right off the bat, as they were either abandoned projects or wholly lacking any documentation or community usage, making it nearly impossible to properly test them out.

This left us with 18 templating technologies to evaluate. We found that these could be broken down into two general categories: embedded JavaScript and logic-less.

These templating options allow you to embed regular JavaScript code directly within the template, an approach similar to ERBs.

This group of templates follows the philosophy that there should be little to no logic in your templates. They do not allow arbitrary JavaScript code in the template. Instead, you must use the small set of constructs offered by the templating language itself, which, depending on the language, may include basic loops, conditionals, and partials.

To pick between the 18 templating options, we assigned each option to a small team of front-end engineers and setup a test: render a (very simplified) LinkedIn profile. 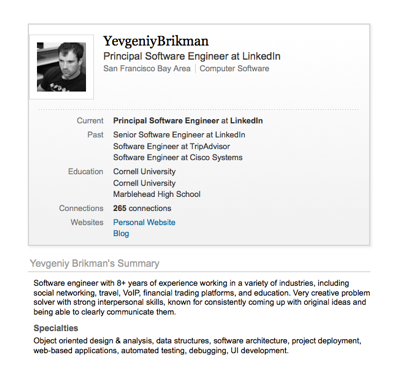 The test: render a simplified profile

We gave each group two files to work with, which you can grab from this Github Gist:

The goal was to produce the exact output in profile.html using one of the templating technologies and the JSON data. We also included a few special requirements to force a slightly deeper dive:

We gave each team a list of features to look for in their assigned templating solution. The idea was to fill out a score, from one (poor) to five (excellent), for each item:

After running through the test, the teams gave the 18 candidate solutions the scores listed below. This evaluation was done in March and April of 2011.

After going through the evaluation process, we had a four way tie for first place between Google Closure Templates, mustache, handlebars, and dust.js. Since many different front-end engineers conducted these evaluations, we knew there would be some inconsistencies between the way people picked ratings, so we didn't read too much into the numbers themselves.

Instead, we took the scorecard as an indicator of which templating options deserved the most attention. From there, to pick the winner, we got detailed feedback on each of the finalists, as listed below.

Based on our evaluation and how we prioritized the requirements, dust.js came out as the winner. It was the option that offered the most features and flexibility while keeping the view code DRY, clean, and fast.

As we roll client-side templates out to more of the site, we have been making tweaks and additions to dust that we hope to contribute back to the open source community. Expect another blog post about that in the future.

Special thanks to Brent Vincent and Yevgeniy Brikman for leading the client-side templating efforts, Eugene O’Neil, Scott Blackburn, Matt Edwards, and Jeffery Chow for quick hacks to provide feedback on the profile rendering use case, and all the other front-end engineers who participated in the template evaluation process.