This is a follow up post to Making Your Feed More Relevantthat provided introductory background on the feed system at LinkedIn. In this post we will dive deep into relevance models and features.

We use many metrics for assessing the engagement level that the feed provides. Below are a few such metrics:

These metrics can be per-user (divided by the total number of users), or overall. Interactions per-user is abbreviated as CTR (click through rate). Metrics that capture immediate reaction to the feed are called upstream metrics (for example interactions or CTR) while metrics that capture delayed reaction to the feed are called downstream metrics (for example, engaged feed sessions).

It is much easier to predict and optimize upstream metrics than downstream metrics. The feed relevance model is trained to predict the interaction rate associated with the viewer and specific updates. That model is used to construct the personalized feed. Specifically, the model performs the following actions:

In this blog post we focus on task 1 above. Task 2 is a simple task of ordering updates by their scores, and task 3 is described in the next blog post in this series.

(1 if there is an interaction and -1 otherwise). Our modeling assumption is that

follows a logistic regression model (conditional on the viewer and update), which is a standard assumption in the industry. Specifically, assuming that

is a vector of parameters capturing the model and

is a vector of features characterizing the viewer, the update, and the context, the logistic regression model is

which is equivalent to

specifies the model, and is learned during the training stage by maximizing the likelihood of the training data.

We collect training data for some fixed time period from a random bucket (a set of users that receive feed updates that are a random shuffle of the top-k updates as ranked by the current SPR[1]). Specifically, we collect response variables

for all users and all updates that were served to the users, together with the associated feature vectors

. The updates with which a viewer interacted with (

=0) are treated as negative examples.

Such likelihood maximization modeling techniques have been used for decades in statistics and are still standard practice in the industry.

More specifically, the maximization is done as follows:

Before conducting an online test, we evaluate a new model offline. The first offline evaluation is comparing the ratio of observed to expected probabilities for different activity types (denoted as the O/E ratio) and whether or not the data likelihood converged to the global maximum. The O/E ratio gives an indication of whether the CTR model overestimates (O/E<1) or underestimates (O/E>1) different pCTR probabilities. 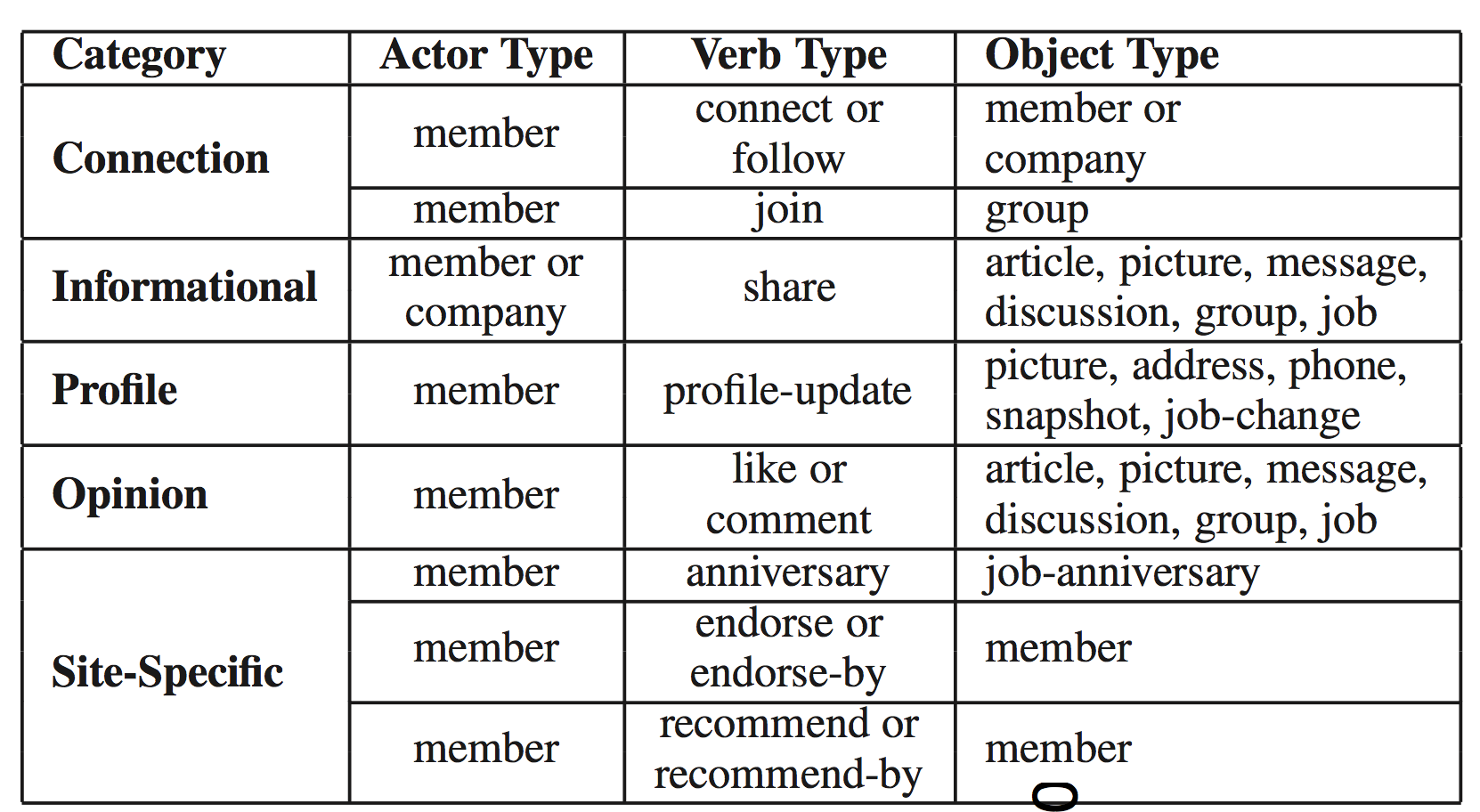 Features in the feature vector

are classified into the following categories:

is a concatenation of the above sub-vectors:

. Since the logistic regression model features a linear combination of features, we can write the inner product

in a decomposed form:

An easy way to bypass this limitation is to transform some features through a nonlinear transformation, and then linearly combine the transformed features. This allows building models that capture complex non-linear dependencies between the features and the response using the simple logistic regression model.

Popular feature transformations used by the feed relevance team include:

Some specific examples of activity only features

Some of the feature groups above are very high dimensional, for example viewer-actor-activity-type affinity or viewer-content affinity. To simplify the engineering and reduce serving latency, we pre-compute these features periodically and store them offline.

[1] The data gathered from the random bucket interaction features a tradeoff of explore-exploit. The exploitation corresponds to only using updates that are ranked in the top-k positions (i.e., judged somewhat relevant by the model). The exploration corresponds to the random shuffle of the top-k positions. Due to the exploration component, random bucket data is more suited for training models than other data that has a stronger bias towards what the current model assumes is relevant.

[3] This statement is somewhat simplified. The model does not require a linear separation, but does assume that the probability is a function of the distance of the point from a separating hyperplane.