Analyzing ad formats, a meeting, ice cream social with an industry leading executive, catered sushi for lunch, flash mob at an all hands meeting, pig debugging, tech talk about virtual reality, intern snacktime, InShape, then out to dinner for Hellfire Challenge with interns. This could be described as a typical day working as an intern at LinkedIn.

Coming from internships in a traditional corporate background, I had a bit of a culture shock getting accustomed to what a coworker dubbed as "Bay area corporate". However, I have to admit that being surrounded by the company's culture and the enthusiasm of each and every employee is infectious. The other day I got a high five from the high five squad. I am loving every moment.

This summer, I got a chance to play with LinkedIn's ad data. The project I worked on was to evaluate the effects of new variables and different methodologies - especially different ad formats - on our ad effectiveness. I initially set up the methodology, a correlation analysis, with a small set of data from our traditional data warehouses but soon realized that I needed a much larger set of data. For this, I learned and used pig to access our Hadoop structure and was able to pull massive amounts of data quickly and efficiently. I then utilized R and Excel to do the analysis and graphics.

I'm a data nerd. Being able to play with the rich data our users produce is like Homer Simpson at a donut shop. And when I say play, I mean it. You are actually encouraged to do anything you want with any tool or data the company has. More so, having an entire day dedicated to that, Hackday, gives even more opportunity to play and grow.

Up all night at the Intern Hackday

Aside form the work, there are events constantly happening. My department, analytics, has been fantastic at keeping the interns involved, interested, and encouraged. We have a very cool Brown Bag session every Thursday where one person discusses what they are working on and gets feedback from everyone else.

In addition, the University Relations team puts something awesome together almost everyday. A few examples: 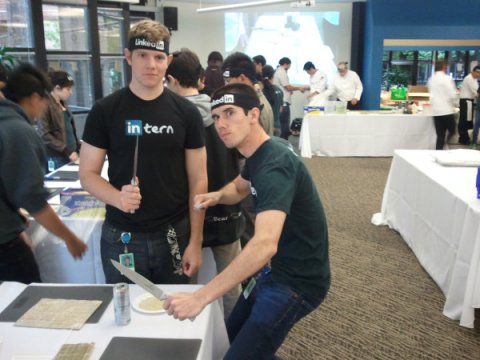 Alongside what University Relations puts on, there are always interesting tech talks and events from the company. As an intern, I also have access to everyone in the company, including people who could be considered bad boys of their respective fields. I have been taking full advantage of getting the chance to learn and receive advice from them.

It has also been great to meet and bond with the other interns. We recently went out to SmokeEaters where I attempted the absolutely brutal Hellfire Challenge, something my mentor completed (don’t ask me how). The pain is pictured below.

It’s a surreal feeling to wakeup in the morning being excited to start my day. Best summer ever. Oh, and before you ask, yes I know who Ferris Bueller is, yes this is my day off, and yes I was named after him. Ask me about it sometime. Or maybe we can talk data or philosophy, I am always up for learning something new.