We previously discussed how we visualize LinkedIn site performance so we can rapidly detect and respond to failures as they start happening. Today, Priyanka, Venkat, Veena and Hien will tell you about how we test Frontier, LinkedIn's in-house web framework, to catch problems before they reach the live site.

Frontier is a UI framework developed at LinkedIn to build scalable, efficient, and reliable web systems. Frontier has several advantages over the traditional MVC frameworks, including a rich user experience, fault tolerance, sophisticated use cases, dynamic adaptation to display or business logic, and latency sensitivity. In addition, Frontier has reusable and testable entities, is heavily cached, and is service oriented. These factors have made the Frontier framework the standard for prime user-facing systems at LinkedIn.

The Frontier framework is built using various entities that work together to serve a user request. Some of the important entities include components (placeholders for displaying page content), dependencies (fetching data from the middle tier), content services (middle tier), URL aliases and routers (routing decision-based application logic), and mutators (for form display and processing).

The Frontier framework uses the concept of early flush, which is to flush the static content (css/js) as early as possible in contrast with the traditional model where content is rendered only when all the data (both static and dynamic) is assembled after the backend service calls. Early flush decreases page load times. The Frontier framework also provides timing flags to tell the middle tier whether or not it should collect timing data to measure the SLA.

The Frontier framework today comprises more than 100 Java classes and has a large amount of active development with enhancements incorporated each day. Given this activity, certifying a framework change has become more and more challenging from the Quality perspective.

Testing a Frontier feature requires not only asserting whether the desired output is rendered on the page per a user request, but also verifying the web application’s response from all authentication levels, with combinations of early flush and timing parameters, and with the right cookies and response headers being returned.

The extent of the testing required a very complete custom Frontier test suite, which exercised all Frontier features with the combinations needed to provide a complete test for a feature change, as well as the impact on the rest of the web applications (regressions).

We had to look at what types of testing would answer the framework needs.

We then looked at performing a complete regression of the web application using the new change. There was a possibility that there might be some flows/code paths or unique conditions that might not be exercised by a web application built with the framework. This could potentially lead to a loophole in testing. Additionally, verifying the response headers, cookies, and all authentication states for each and every web application is overkill for testing. It is also not in principle with the concept of traditional blackbox testing, where the focus is on the end user’s point of view.

To address this issue, we came up with Fronttest, a test web application, created solely to exercise all features of Frontier. We believe testing with this web application, from both whitebox and blackbox perspectives, will provide a well-rounded testing baseline.

A complete test plan is difficult to detail here, but the following list provides some of the important features that Fronttest covers:

We used Emma Java code coverage to ensure all the code paths were exercised. We employed various traditional whitebox approaches such as line coverage, branches/loop testing, and exceptions/error cases simulations. Emma generates a clear and concise report summary of all the classes, packages, and methods being covered with percentages, color schemes (green and red) to visually identify the lines covered or skipped. The report also provides easy navigation and click-through links to view package, class, and function in detail. 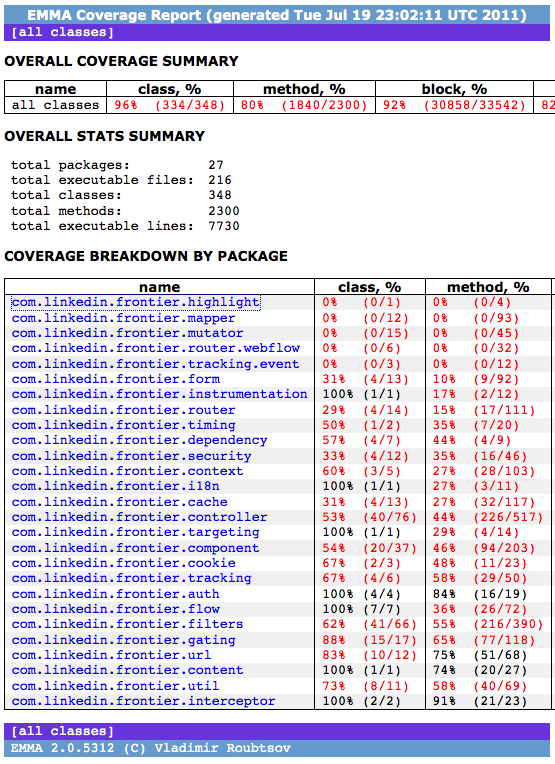 We used Selenium (web testing tool) with Ruby to test the Fronttest web application from the UI blackbox perspective; that is, to ensure that all UI elements (for example, images, text, form elements, dialogs, and menus), web links, form submissions, and success and error conditions functioned correctly. We used various Selenium APIs to inspect/parse the HTTP responses to assert whether the response headers (pragma, cache-control, expires) and cookies (browser, visit, and some custom Linkedin cookies) were set/returned with correct values.

A combination of previously mentioned whitebox and blackbox testing techniques give us an insight on how a change or an enhancement in the framework would impact Fronttest. After this is certified, we could have confidence for whether or not the change is functioning. We could then follow the usual application-specific regression to certify that the new change works. If necessary, test code and test cases can be added in Fronttest to ensure the change is well covered.